With 70 Day-One Team Members, the Iconic Caesars Brand Celebrates Four Decades of Success on The World-Famous Atlantic City Boardwalk
Recently Recognized By TripAdvisor® as a Proud 2019 Hall of Fame Recipient, Caesars Was The #1 Traveler-Ranked Atlantic City Hotel For The Majority of 2018

, /PRNewswire/ -- Caesars Atlantic City is celebrating its 40th anniversary this summer to commemorate four decades of achievements and milestones. Beloved by generations across the tri-state area, the premier oceanfront resort destination has evolved to meet an ever-changing consumer demand for new experiences and new audiences. By hosting hundreds of signature events, offering first-class entertainment, award-winning restaurants, and offering an array of accommodation options with stunning views, Caesars has proved to be a steadfast iconic resort destination in . 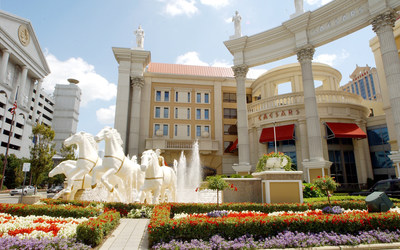 On the heels of over in capital investments and improvements into its resorts over the last several years, including most recently the debut of Gordon Ramsay Steak and a hotel renovation at Harrah's Resort, the company recently-debuted two new sportsbooks in this June, including The Book at Bally's, located in The Wild Wild West, receiving nods as the most energetic casino in ***.  The Book at Bally's will additionally serve guests at Caesars and will reinvent the bar and betting experience in the market as the largest sportsbook in , rivaling the top books in Las Vegas.

The Book, currently in its soft opening phase, will introduce an immersive entertainment experience with the city's first self-serve beer wall, Beer Yourself, and private VIP Fan Caves, with food & beverage service by celebrity chef .

"With three resorts in the market, Caesars has viewed as critical to our success over the past 40 years," said , CEO of .  " is a popular destination, especially during the summer months, for one-third of the U.S. population and many of our 55 million Caesars Rewards members, who live within driving distance of our properties.  Having started out at Harrah's Resort, and spending most of my career in the City, I have a special appreciation of this landmark 40th anniversary for Caesars, the gaming industry and ," he added.

"For almost half a century now, Caesars has been committed to and has led the way in positioning the city as a leading gaming & entertainment destination on the ," explained , Regional President for .  "But most importantly, however, is our dedication to helping make the community we serve a great place to both work and play. Through all the ebbs and flows this market has seen, Caesars has continued to thrive over the last 40 years, and we attribute much of our success to our 70 day-one employees who deliver top-notch service to our guests each day, and our loyal customers. We are thrilled to celebrate our 40th anniversary this summer at Caesars."

Staying true to its entertainment and dining roots, continues to offer guests curated experiences through an impressive roster of fine-dining establishments including only restaurants by a world-class Michelin-rated chef, (Gordon Ramsay Pub & Grill at Caesars; Gordon Ramsay Steak at Harrah's Resort) and Nero's , Caesars' legacy restaurant, which still upholds its timeless, nostalgic vibes, hosting boldface names like and over the years.  Celebrating its own 25th anniversary milestone this year, Nero's has been known for its outstanding Sunday brunch, named one of the country's Top 10 Brunches in America by The Daily Meal, as well as being acknowledged by NJ.com as the #1 restaurant in the state of for the best premium steak.**

Over the past 40 years, the resort expanded to almost double its original capacity to help build a foundation for many celebrity careers at the Circus Maximus Showroom, including , , , Journey, , and many more.

The most important part of Caesars' success, however, has been its 70 legacy employees who have been with the company from the first day the resort opened its doors.  For over 40 years, these team members have delivered superior customer service and have been reliable, friendly faces Caesars' loyal customers have come to know and love.  Bally's, which will also celebrate its 40th anniversary this year, uniquely has 46 day-one employees, bringing total number of legacy, 40-year team members to 116.

A 40-Year Commitment To

For the past four decades, Caesars Atlantic City has been committed to help build a strong community by empowering team members, supporting local businesses and over 300 community organizations last year, and respecting the environment through its industry-leading Code Green initiative.

Four Lucky Spots to Touch On The Boardwalk

Known as an iconic gaming and hospitality brand around the world, and offering the loosest slots in * in true Monopoly-style Caesars has developed a list of four iconic "lucky spots" to see and touch on , hoping to bring guests happiness and good fortune this summer.

As the resort reflects on its many memories and milestones, continues to lead the reinvention of the hotel and casino industry in .

In celebration of this milestone, all three of Caesars' resorts, including Harrah's Resort and Bally's, also celebrating its 40th anniversary this December, will offer guests entertainment, culinary events, and exciting nightlife throughout the summer.

Other milestones within the 40th anniversary year include Gordon Ramsay Steak's 1-year anniversary at Harrah's Resort, which has exceeded expectations in only one year of operation, further strengthening Caesars stellar profile of restaurants with two signature, world-class dining experiences by the 7 Michelin star chef and television personality, .

For more information or to book your room for the many celebrations, visit https://www.caesars.com/atlantic-city.

About
is one of the world's most diversified casino-entertainment providers and the most geographically diverse U.S. casino-entertainment company. Since its beginning in , in 1937, has grown through development of new resorts, expansions and acquisitions. resorts operate primarily under the Caesars®, Harrah's® and Horseshoe® brand names. portfolio also includes the Caesars Entertainment UK family of casinos. is focused on building loyalty and value with its guests through a unique combination of great service, excellent products, unsurpassed distribution, operational excellence and technology leadership. is committed to its employees, suppliers, communities and the environment through its PEOPLE PLANET PLAY framework. For more information, please visit www.caesars.com/corporate. 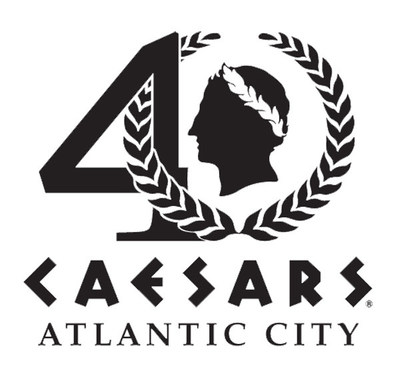