, /PRNewswire/ -- Today, 13-time GRAMMY® Award-winning, multi-platinum selling global superstars, The Chicks, announce their first ever engagement at at . The shows will be held , 5, 6, 10, 12 and 13, 2023, with all performances scheduled to begin at 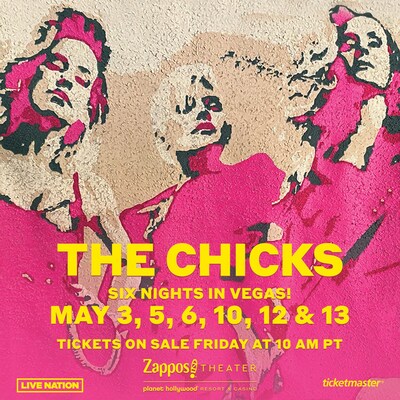 The Chicks said, "Finally getting to play live in 2022 left us hungry to continue our tour. After so many years without new music, last year felt like a long time coming. We hope our fans are ready for more in 2023 because we are not done! There is a lot more to come this year and we are excited to get it all started in at the this Spring."

Caesars Rewards members, loyalty program, and and Ticketmaster customers will have access to a presale from at until at .

About The Chicks
The Chicks are , , and . Superstars, renegades, innovators, heroes, villains, and moms, they have grown from a band into a cultural phenomenon. Since the release of their debut album, WIDE OPEN SPACES in 1998, The Chicks music has stirred emotions in fans around the world, making them one of the biggest and most influential bands of our time. Earning universal recognition as the biggest-selling female band of all time, The Chicks have sold more than 30.5 million albums and are among an elite group of artists and the only female group to achieve multiple "diamond" selling (ten million copies) releases. Counting 13 GRAMMY® Awards, six Billboard Music Awards, four American Music Awards, and numerous Awards among many other accolades, their last record-breaking studio album, TAKING THE LONG WAY (2006), won five GRAMMY® Awards including "Album of the Year," "Record of the Year," and "Song of the Year." Their on-stage reputation has catapulted them to sell over worth of concert tickets, while outspoken songs like "Goodbye, Earl" and "Not Ready To Make Nice" make it clear that this power trio plays by their own rules. In , The Chicks performed "Daddy Lessons" alongside at the 50th Anniversary of the Awards and released a studio version of the track to digital outlets the following day. In 2019, The Chicks returned to the airwaves as a feature on "'ll Get Better," one of the leading tracks off Swift's seventh studio album, LOVER. After 14 nearly years, The Chicks released their fifth studio album GASLIGHTER, on .

About
is the centerpiece of the famed Las Vegas Strip, with 2,500 beautifully redesigned guest rooms and suites showcasing some of the best views in town, along with endless options of unparalleled shopping, distinguished dining, popular entertainment and a bustling nightlife. A bright, bold addition to the resort's portfolio, the Ultra Hip Rooms feature contemporary elegance and luxury bedding. Known as the place to play for its roster of A-list celebrity guests, Planet Hollywood's 231 restyled suites feature stunning views of the glittering skyline and daring décor elements such as suspended sofas, lounge-style living spaces and oversized modern artwork. The resort encompasses more than 100,000 square feet of gaming, Caesars Sportsbook at Planet Hollywood, The Scene Pool Deck, several lounges, an intimate wedding chapel, and a relaxing spa and salon. Impressive restaurants include , KOI, Strip House and more. Home to the first pop music residency in , is one of the largest theaters on the Vegas Strip and showcases a variety of resident headliners including superstars like The Chicks, and . Magician performs an over-the-top visual spectacular of "Criss Angel MINDFREAK®" in the . The property is encircled by with more than 170 specialty stores and restaurants. is operated by a subsidiary of (NASDAQ: CZR). For more information, please visit planethollywoodresort.com or the Caesars Entertainment Las Vegas media room. Find on Facebook and follow on  and Instagram. Must be 21 or older to gamble. Know When To Stop Before You Start.® If you or someone you know has a gambling problem, crisis counseling and referral services can be accessed by calling or texting 1-800-GAMBLER ©2021, . 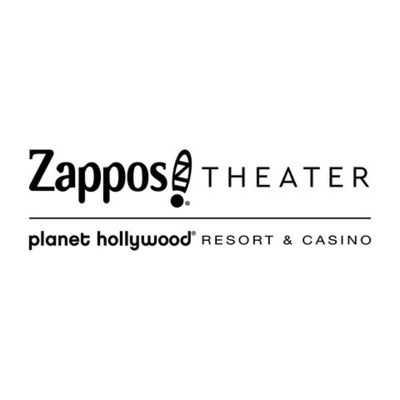