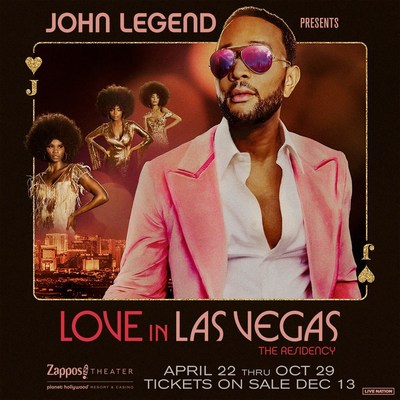 Designed exclusively for and promoted by and , "Love In Las Vegas" will be a beautiful, soulful concert experience, showcasing Legend's greatest hits, "soaring vocals [and] silky-smooth piano playing skills" (Billboard). The performance will feature Legend's incredible full band and will be a vibrant, colorful celebration of love and coming together, sentiments echoed on Legend's -winning seventh studio album, Bigger Love, and companion 2021 headline tour – which resulted in multiple sold out shows and garnered rave reviews in the press.

The 24 highly anticipated performances going on sale are:

VIP packages will also be available. Tickets and packages may be purchased online at ticketmaster.com/JohnLegendVegas. All shows are scheduled to begin at

About John Legend
Multiplatinum artist and activist John Legend made history as the first man to join the prestigious EGOT club. The 12-time -winner released his seventh studio album, Bigger Love, in 2020 and wrapped his nationwide Bigger  in October. Legend is currently a judge on the Emmy-nominated show, The Voice, and a principal in Get Lifted Film Co. As an activist, Legend initiated the #FREEAMERICA campaign in 2015 to change the conversation surrounding criminal justice policies and to end mass incarceration.

About
is the centerpiece of the famed Las Vegas Strip, with 2,500 beautifully redesigned guest rooms and suites showcasing some of the best views in town, along with endless options of unparalleled shopping, distinguished dining, popular entertainment and a bustling nightlife. A bright, bold addition to the resort's portfolio, the Ultra Hip Rooms feature contemporary elegance and luxury bedding. Known as the place to play for its roster of A-list celebrity guests, Planet Hollywood's 231 restyled suites feature stunning views of the glittering skyline and daring décor elements such as suspended sofas, lounge-style living spaces and oversized modern artwork. The resort encompasses more than 100,000 square feet of gaming, several lounges, impressive restaurants including , KOI, Strip House, and the award-winning Spice Market Buffet, an intimate wedding chapel and the by Mandara. Home to the first pop music residency in , is one of the largest theaters on the Vegas Strip and showcases a variety of resident headliners including superstars like , Scorpions and . Magician performs an over-the-top visual spectacular of "Criss Angel MINDFREAK®" in the newly-renovated . Additionally, Angel along with visionary creator Franco Dragone have teamed up to create AMYSTIKA – The Secret Revealed, a fantastical and mysterious production which immerses the audience in a spectacle of euphoric, stunning illusions, one-of-a-kind special effects, jaw-dropping stunts and much more, beginning preview performances Dec. 27 The property is encircled by with more than 170 specialty stores and restaurants. is operated by a subsidiary of (NASDAQ: CZR). For more information, please visit planethollywoodresort.com or the Caesars Entertainment Las Vegas media room.  Find on Facebook and follow on Twitter and Instagram. Must be 21 or older to gamble. Know When To Stop Before You Start.® If you or someone you know has a gambling problem, crisis counseling and referral services can be accessed by calling 1-800-522-4700 ©2021, .